We’ve been having problems with our five year old son’s bad behaviour for a while now.  He is the cutest thing but he can be a handful.  What we used to do when he was not listening or behaving badly was to send him to his room  That made him angry and he would start screaming, kicking and throwing stuff.  We had to remove all the toys from his closet because he would throw them on the wall.  It always ended up whit me or my husband screaming and giving him consequences over consequences.  That was frustrating for us as well as for him and we all felt really bad after.

A year ago, we had someone from Andrew’s school come at our house to observe him and give us tricks.  She suggested we try the time out chair.  I had heard about it but just knew my son would not stay sit on a chair, not even for a minute, so sending him to his room what easier for us to do.  From now on, when he was not listening to us or behaving badly, we were to put him 4 minutes (1 minute per year of age) on the chair and he was to stay there calmly until the beep.  If not, we had to restart the four minutes again.  The first few times were really hard,  I had to put him back on the chair and restart the timer about 15 times, but after a while (2 days) it got better and actually worked and he started to listen more and behave better.  Then summer came and he was doing better, so we went back to our old ways….  BIG MISTAKE!  He started behaving badly again in the fall and it got worse and worse over the winter.  So guess what?  Since last week, the time out chair is back and after a week, we have noticed a big difference.

Not listening to us and behaving badly is not the only problems we’ve had.  He was also not listening to the teacher’s instructions at school and taking for ever to get dressed in the morning to go take the bus, we even missed the bus one morning.

Here is what we are doing now and it seems to work.

It’s only been a week and I am very excited because it’s working. He is listening more and we are screaming less, he got dressed all week and there was still 3 minutes left on the timer and he had 4 good days in a row at school.  I am so proud of him and love him so much.
Hope this can help some of you just like it helped our family.
Caroline
(Visited 137 time, 1 visit today)
The Benefits of Drinking Warm Lemon Water » 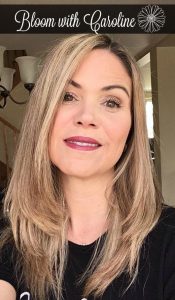 Welcome to Do It All Working Mom. I'm Caroline and I'm a busy working mom of 2. I work full time and I also really enjoy being a Younique presenter. I love to cook, garden, entertain and I enjoy a nice glass of wine. I will be sharing with you easy recipes, DIY and beauty tips for all the busy moms out there.

7 WAYS TO SIMPLIFY YOUR LIFE AND REDUCE STRESS / 7

I wanted to wait before sharing but I'm too excite

My beauty box is not just makeup for a good price!

Why start an MLM business when you already have a